Arabic Language and Grammar Volume I 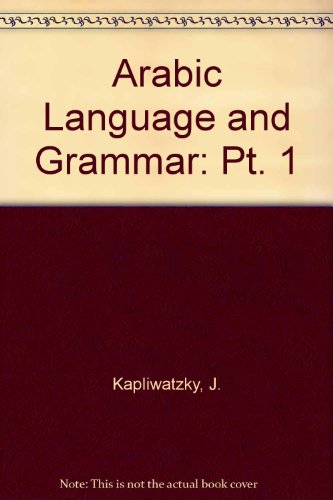 Jochanan Kapliwatzky taught Arabic and other Semitic subjects in Vienna and Berlin in the 1920’s and 1930’s. In Israel he wrote a series of books, one of which is the present title for English speakers who wish to learn Modern Standard Arabic. I have been told that it is intended for middle-school students, and the pace of presentation bears this out. Mastery of the first volume takes the student to approximately half or less of a college level semester, but mastery of all four would be a feat to admire. True, his knowledge of colloquial English failed him when he used some words that are ambiguous and probably caused middle school pupils to titter, but this a charming quirk rather than a defect.

It is published in four hard bound volumes of 100-150 pages each, with an accompanying brochure-sized key to exercises for volume one. The author states in the introduction that he wishes to avoid overly complex explanations and to make Arabic grammar accessible to everyone. In this, I believe, he has succeeded.

My edition was published in 1959, cost a modest $16.00, and the four blue volumes occupy a place of honor in my library. I love the book for the beauty of its Arabic font, the copious vocabulary, the many exercises and readings that reinforce what has already been studied, and the thorough coverage of the language’s grammar.

Alas, this title appears to be out of print, and searches on second-hand dealers’ sites such as […] have turned up several copies of volume one, and one of volume four, both at outrageous prices. Lucky is the student who finds the whole set at a reasonable price.

Arabic Language and Grammar Volume I