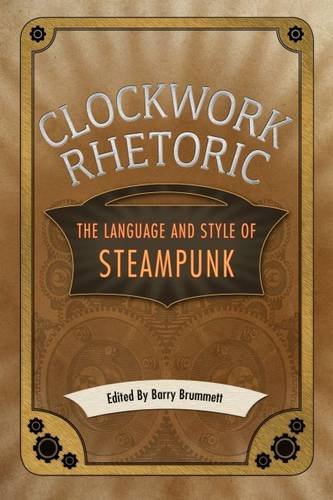 Clockwork Rhetoric: The Language and Style of Steampunk

This unique book explores how the aesthetic and cultural movement “”Steampunk”” persuades audiences and wins new acolytes. Steampunk is an aesthetic style grounded in the Victorian era, in clothing and accoutrements modeled on a heightened and hyper-extended age of steam. In addition to its modeling of attire and other symbolic trappings, what is most distinctive is its adherents’ use of a machined aesthetic based on steam engines and early electrical machinery: gears, pistons, shafts, wheels, induction motors, clockwork and so forth.

The aesthetic was first articulated in literature in the works of Jules Verne and H. G. Wells. The American West later contributed images to the aesthetic–revolvers, locomotives, and rifles of the late nineteenth century. Among young people steampunk has found common aesthetic cause with Goth style. Examples from literature and popular culture include William Gibson’s fiction, China Miéville’s novels, the classic film Metropolis, and the BBC series Doctor Who. This volume recognizes that steampunk, a unique popular culture phenomenon, presents a prime opportunity for rhetorical criticism.