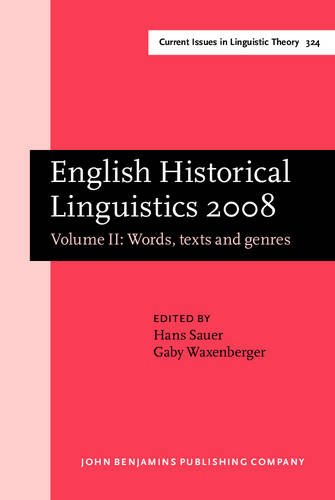 The fifteen papers selected for Volume II of English Historical Linguistics 2008 have a different emphasis than those in Volume I (CILT 314, Lenker et al. 2010). Nine concentrate on the development of the English vocabulary and six on historical text linguistics, including the development of text-types and of politeness strategies. Of those in the former group, three have their emphasis on etymology, three on semantic fields, and three on word-formation, although some cover more than one of these areas. The topics include: the treatment of etymological problems in the OED; deverbal derivations formed from native verbs and from loan-verbs; the role of metaphor and metonymy in the evolution of word-fields. The field of historical text linguistics is introduced by a general survey, which is followed by more specific studies focussing on 15th-century legal and administrative texts from Scotland, on early 15th-century women’s mystical writings, on medical recipes from the 16th to the 18th centuries and on pauper letters from 18th-century Essex. The book should appeal to scholars interested in English etymology, the history of semantic fields and of word-formation, as well as in historical text linguistics, politeness strategies and standardization. It provides not only theoretical considerations but also a wealth of case studies.