Home » General » Events, Arguments, and Aspects: Topics in the Semantics of Verbs 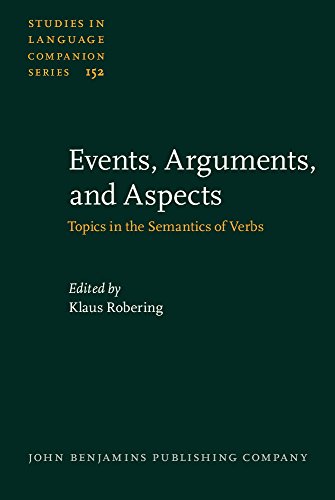 Events, Arguments, and Aspects: Topics in the Semantics of Verbs (Studies in Language Companion Series)

The verb has often been considered the center of the sentence and has hence always attracted the special attention of the linguist. The present volume collects novel approaches to two classical topics within verbal semantics, namely argument structure and the treatment of time and aspect. The linguistic material covered comes from a broad spectrum of languages including English, German, Danish, Ukrainian, and Australian aboriginal languages; and methods from both cognitive and formal semantics are applied in the analyses presented here. Some of the authors use a variety of event semantics in order to analyze argument structure and aspect whereas others employ ideas coming from object-oriented programming in order to achieve new insights into the way how verbs select their arguments and how events are classified into different types. Both kinds of methods are also used to give accounts of dynamical aspects of semantic interpretation such as coercion and type shifting.