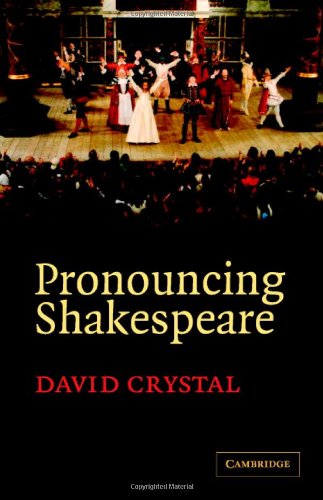 How did Shakespeare’s plays sound when they were originally performed? How can we know, and could the original pronunciation ever be recreated? For three days in June 2004 Shakespeare’s Globe presented their production of Romeo and Juliet in original, Shakespearian pronunciation. This book tells the story of how it happened.

In an unusual blend of autobiography, narrative, and academic content, reflecting the unique nature of the experience, David Crystal recounts the first attempt in over fifty years to mount a full-length Shakespeare play in original pronunciation. The story begins by introducing the Globe theatre and its approach to ‘original practices’, which had dealt with all aspects of Elizabethan stagecraft – except pronunciation. It traces the way the idea developed, from the initial proposal in 2003 through planning and rehearsals to the full-scale production in 2004. A large section is devoted to the nature of the Early Modern English sound system and the evidence for it. Other major sections include reports of how the actors coped with the task of learning the pronunciation, how it affected their performances, and how the audiences reacted.